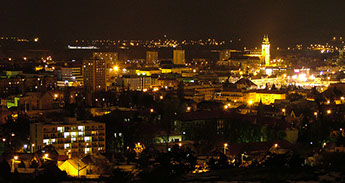 Nitra is situated 80 kilometres south-east of Bratislava. There is a river of the same name - Nitra and on the north side you can find mountain Zobor. With Bratislava - Nitra is one of the oldest towns in Slovakia. With more than 84 000 inhabitants so far is Nitra the 5th biggest city in Slovakia.

First time was the area of Nitra inhabited in prehistorical times, as we can see b many archeological discoveries. First settlers founded their homes within the city area 6 000 years ago. This was an important centre of Celts, later on old Slovanic people. In the beginning of 9th century it was the dwelling of Pribina, and the city was one of 2 main cities of Great Moravia. In Nitra you can find the 1st known catholic church built in middle and east Europe, which was built in 828.

In Nitra you can find The Theatre of Andrej Bagar. The beginnings of theatre in Nitra are dated by 1883, when the 1st theatre in Nitra was built. It took place on the spot of today's theatre, but it was destroyed durind the WWII and theatre was performing in alternative building till 1992, when the building on Svätopluk's square was finished.

Title Theatre of Andrej Bagar was agreed in 1979and was named by very important Slovak actor&director - Andrej Bagar.